Been a couple days…things have been crazy busy with ministry and fun.

Sunday was great sharing at ICA East.  I preached the first in a 4 week series called Mindful.  There were so many people who expressed their appreciation of the talk and how it was perfect timing.  Love seeing how God can speak a message to a communicator across the world and make it timely for those here in Indonesia.  AMAZING

After service we went out to another crazy good restaurant where Jaiden ate nearly a whole family sized serving plate of Kung Pao Chicken.  She is loving the spicy foods!  Taking after her daddy for sure.

Sunday night we invited the staff over for Homemade Apple Crisp at the house.  Was fun to watch the girls open up and the whole family get to know some great people.

Yesterday we spent the day at the zoo.  Long drive from the house (2 and 1/2 hours into the Volcanic mountains.  There was traffic all the way.  This zoo allowed you to get so close to the animals .  Dana placed some of the photos from the zoo on her Facebook HERE.

I continue to see crazy stuff from our driving around.  Here are a few moment in picture. 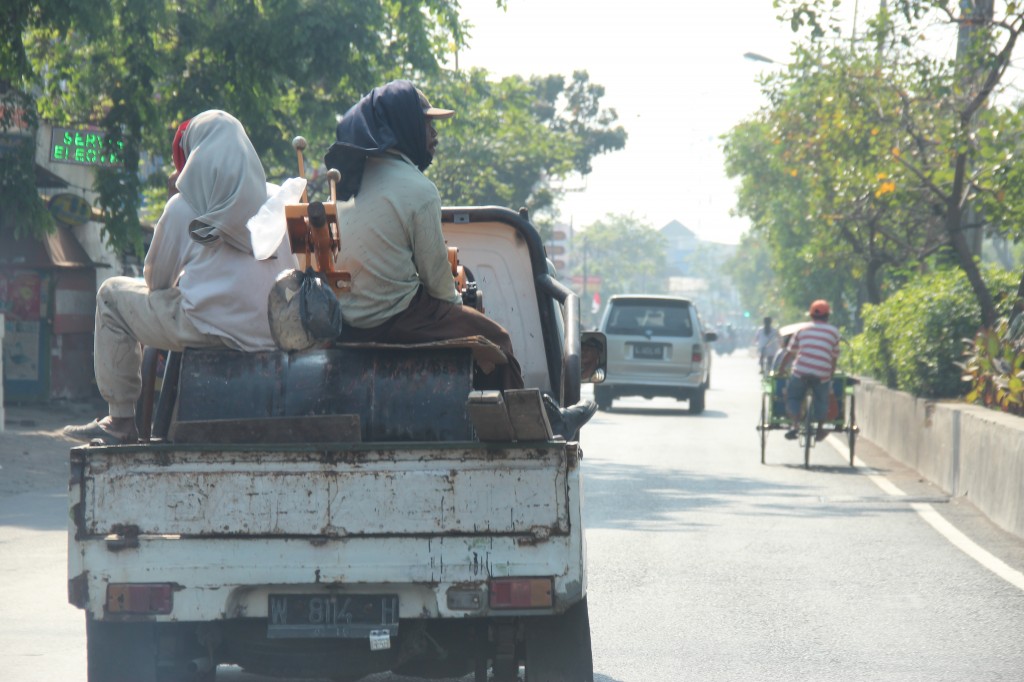 Another day on the roads of Surabaya 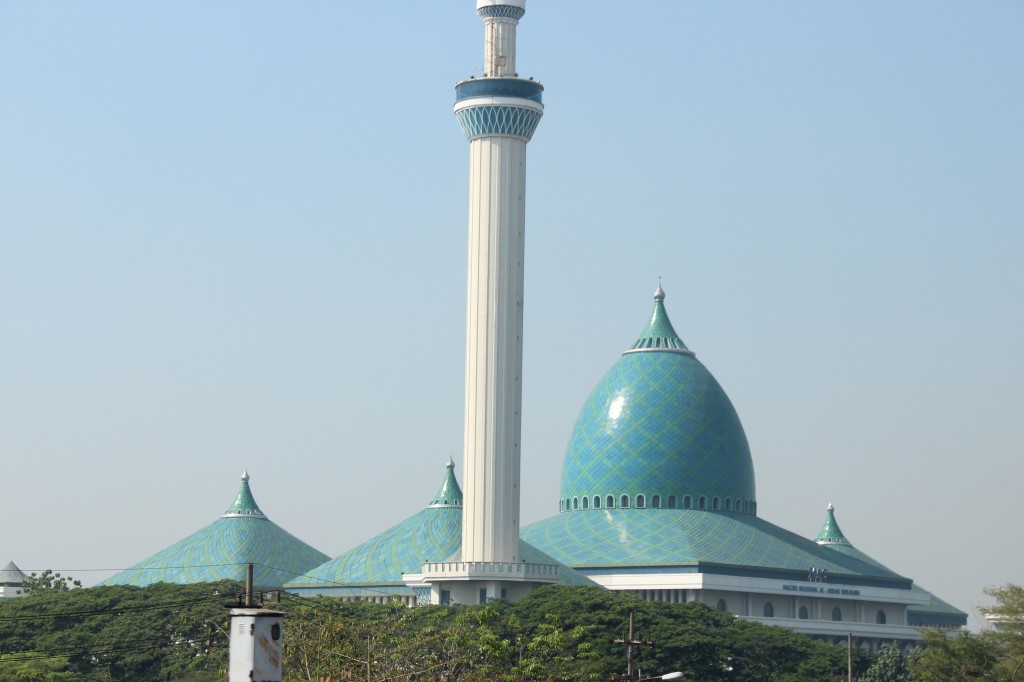 Largest Mosque in Surabaya. This place is huge. 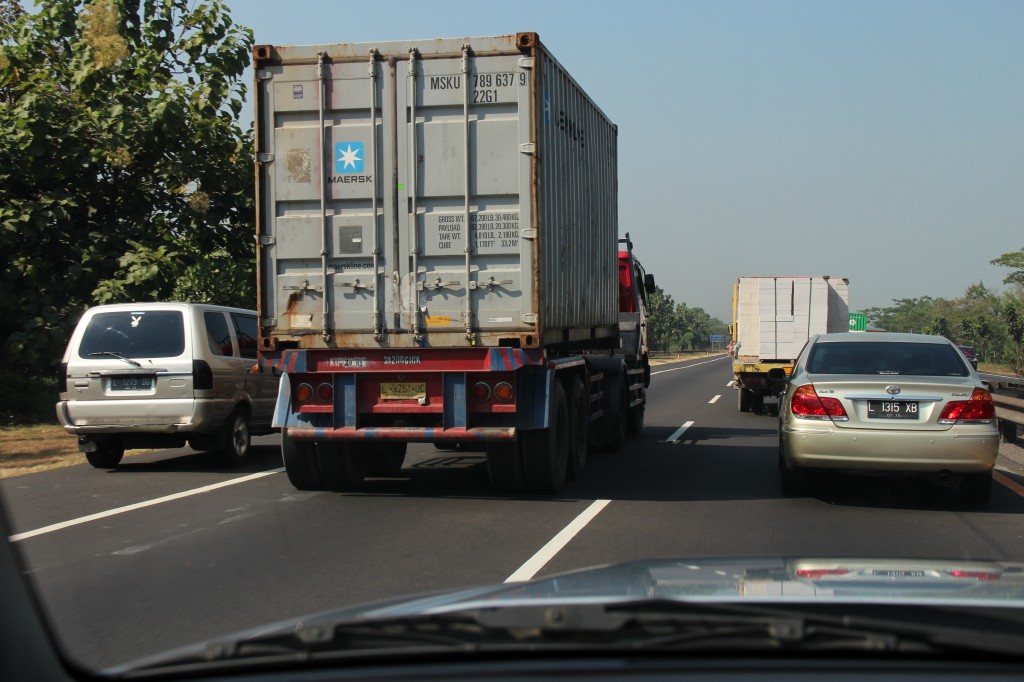 The white lines mean nothing in Surabaya, and obviously the shoulder is just another potential lane! 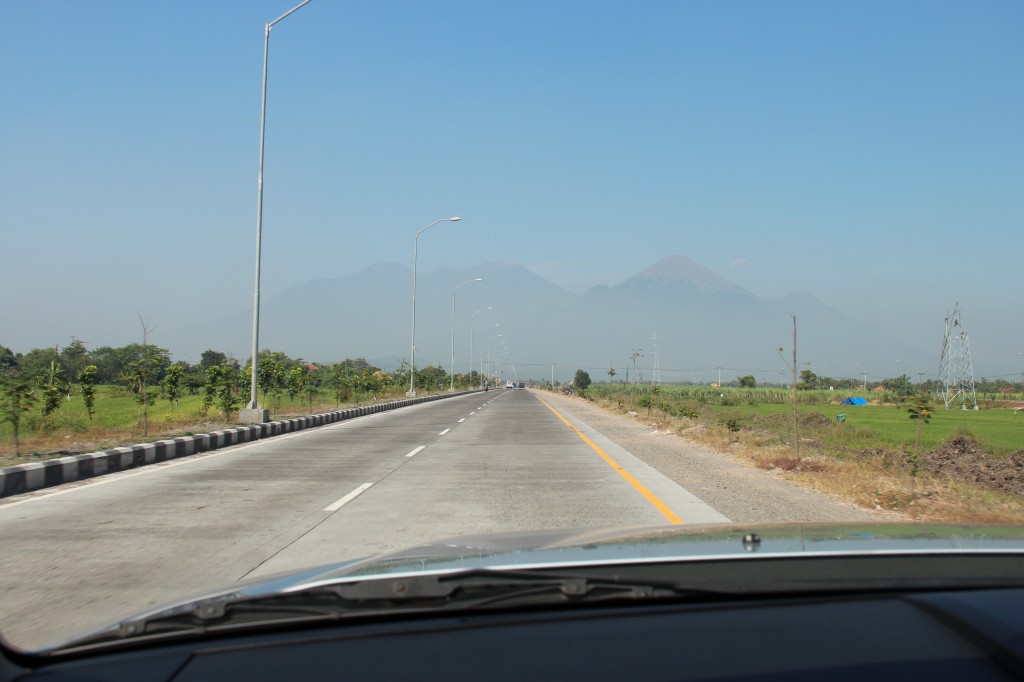 They are constantly burning their trash here, so smoke is a constant. The Volcanos are constantly releasing ash into the atmosphere as well, so you are driving along and suddenly you see a mountain that has been there the whole time, you can just finally see it. 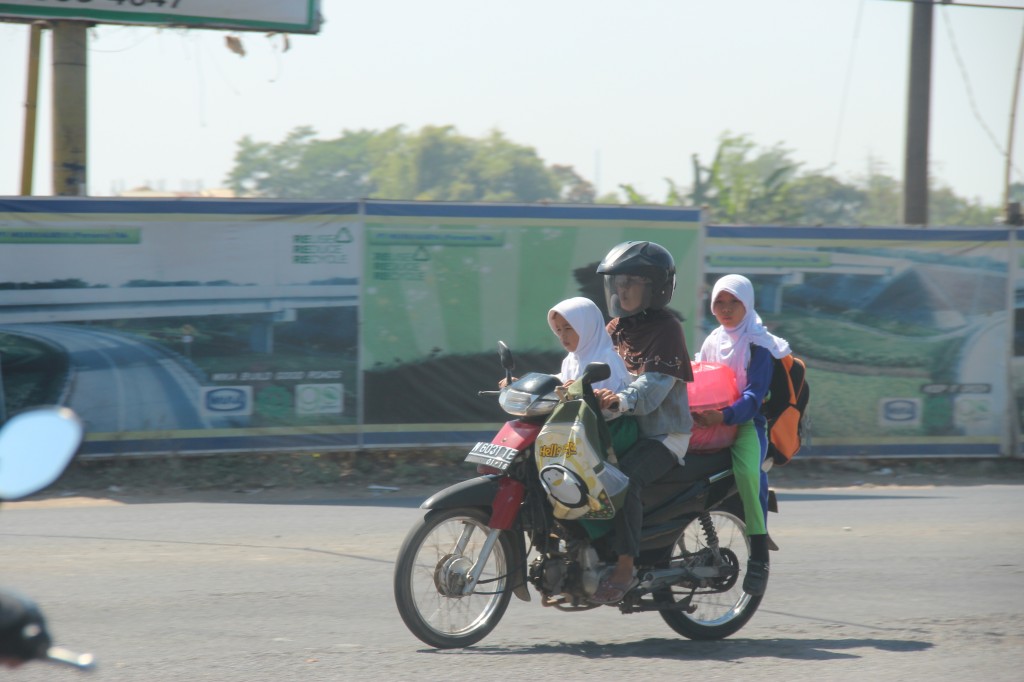 Taking picks of kids on bikes never gets old. 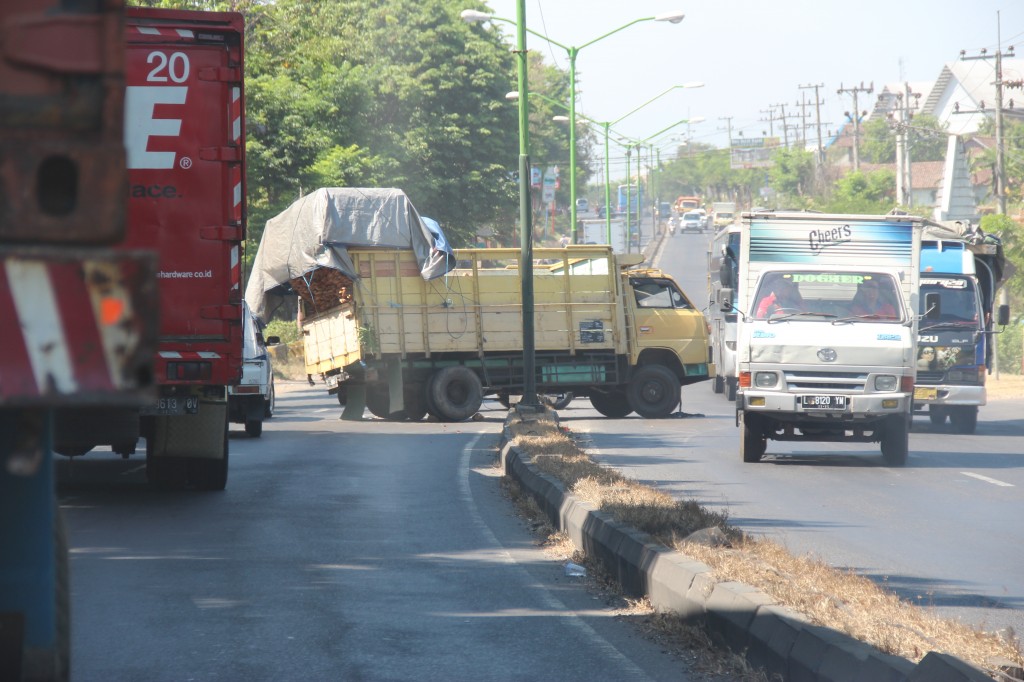 When you have an oversized load a Uturn can break your axel. Just another day on the road. 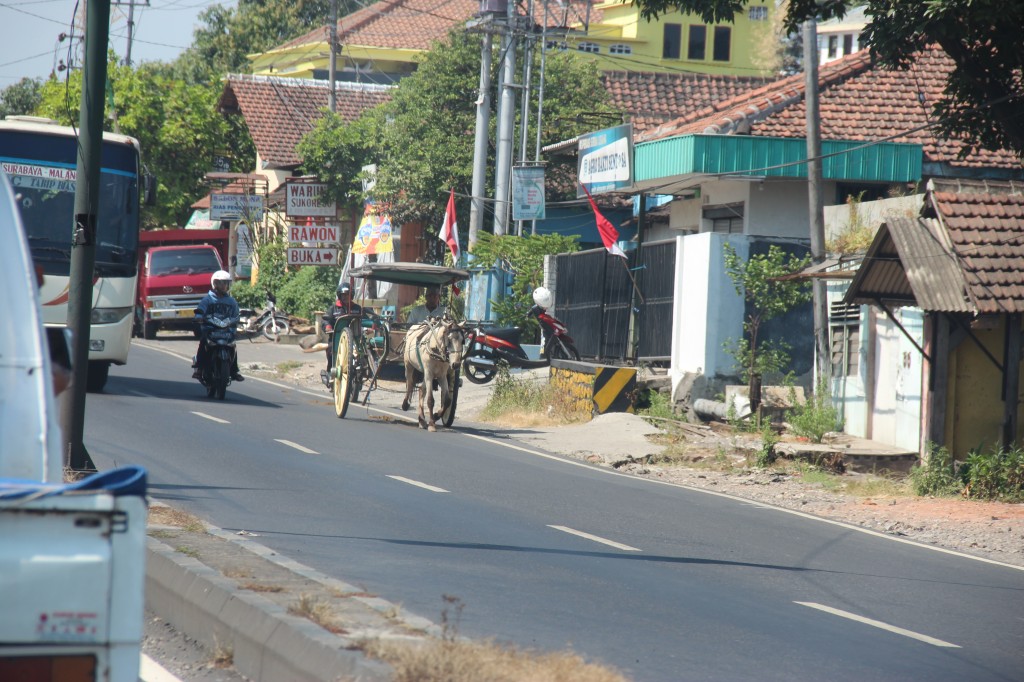 you see it all on the road 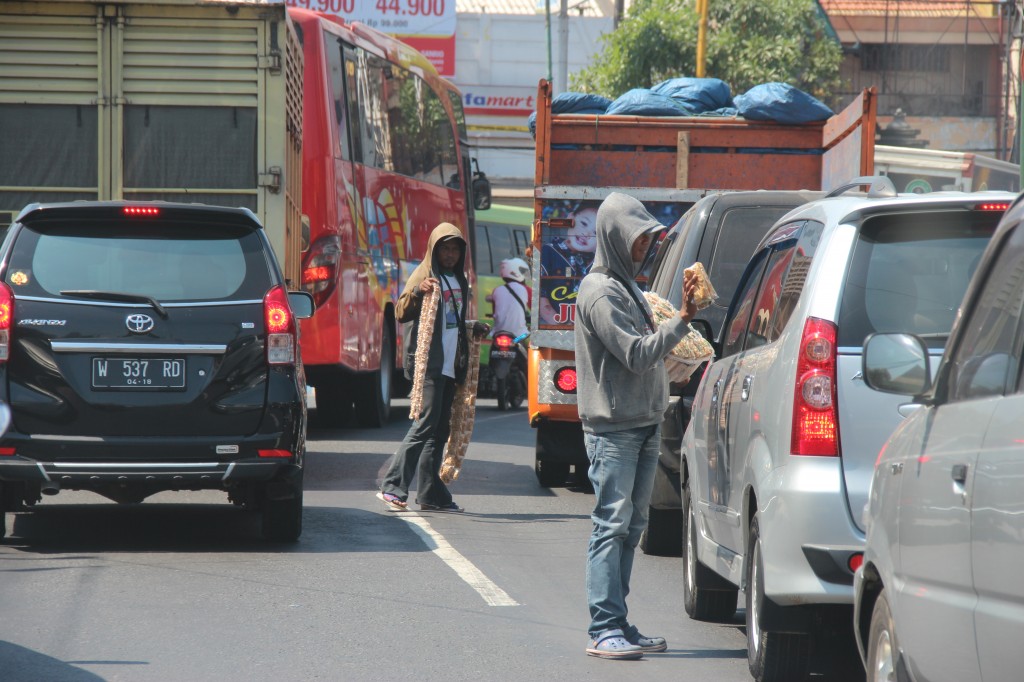 Every light another opportunity for business. At least these were adults and not the 4 year olds at most other lights. 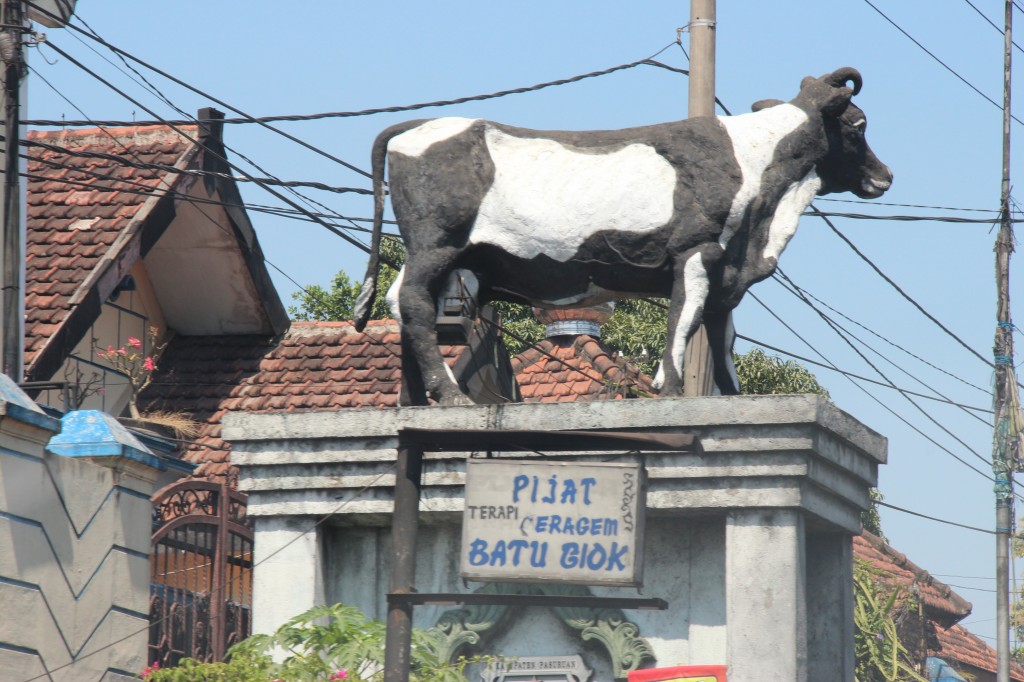 Because they can I guess!

Who wants to work on this scaffolding? 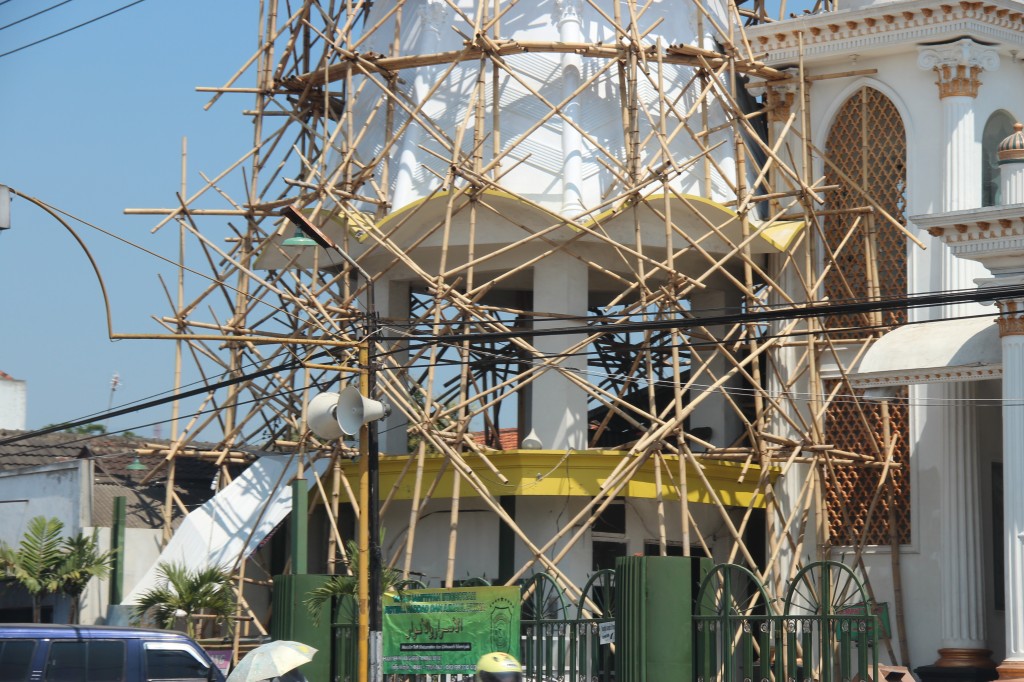 Let’s put a bunch of sticks together and climb to the top. WOW 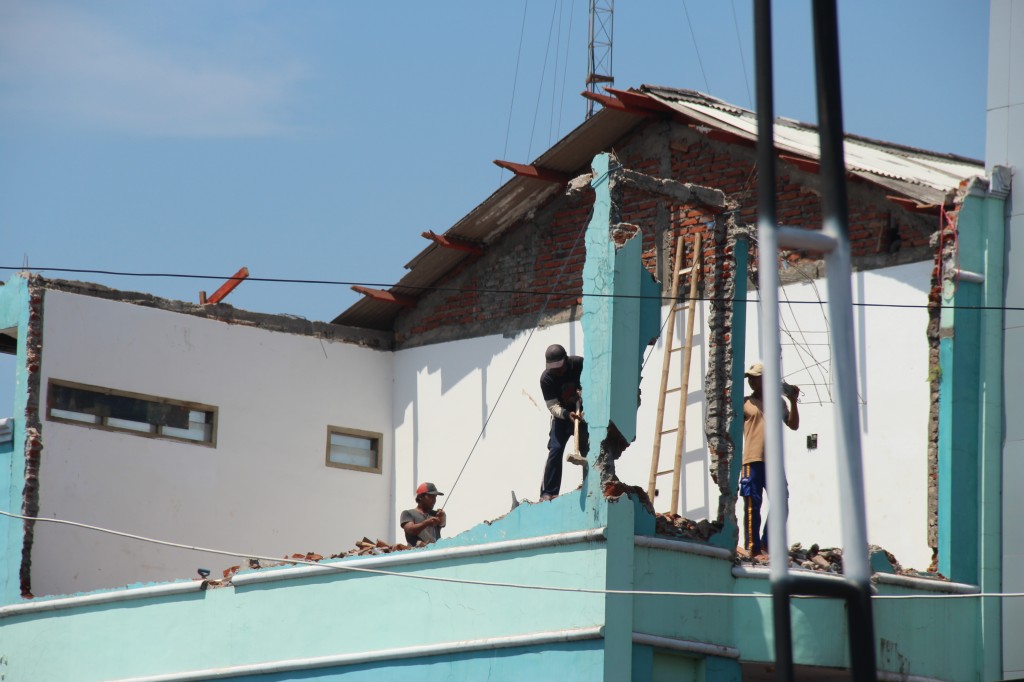 Look at the reality of this image. They are trying to keep the demolition from falling on those going into a restaurant below. What I don’t think the guy with the hammer realizes, is the way this is going to fall when he hits it. 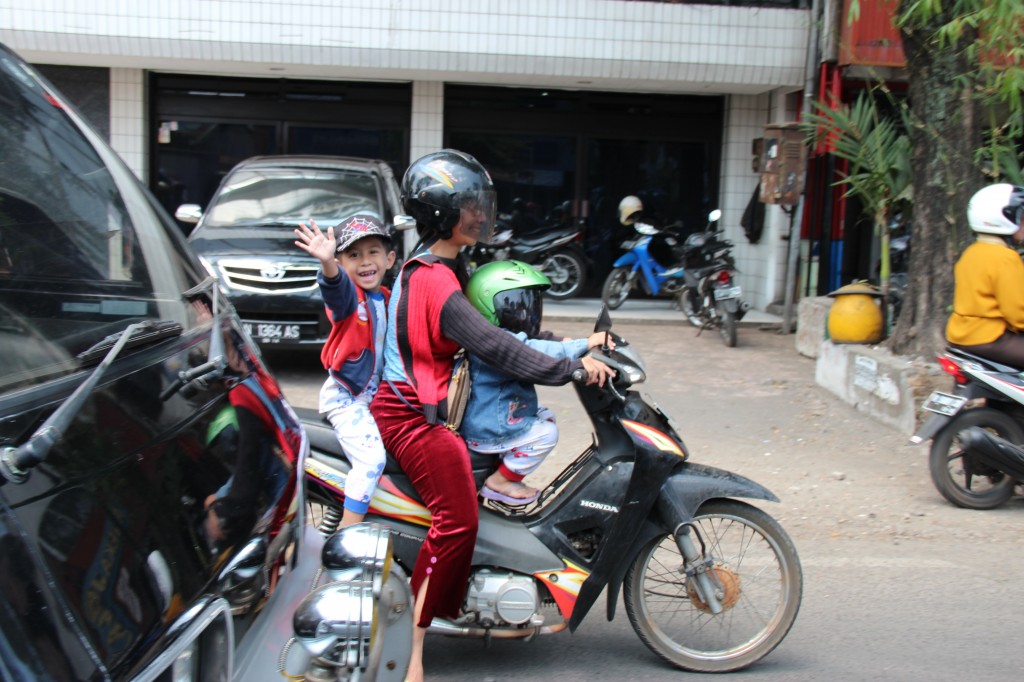 Look the white man is taking my picture mom. 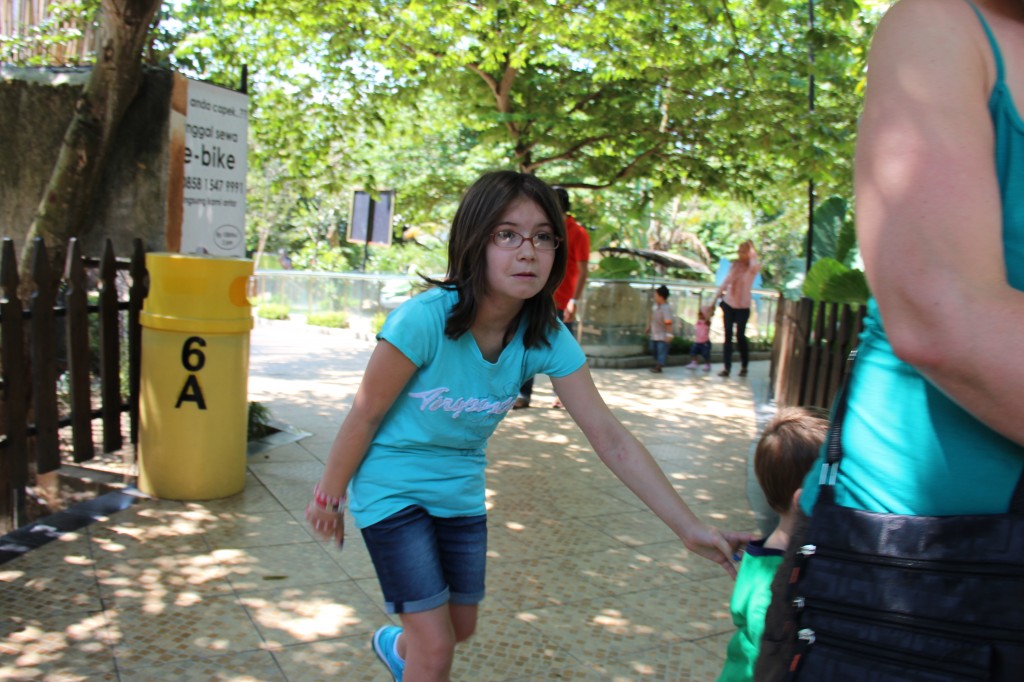 Let’s just say Jenna was afraid that the animals we could reach through and touch might eat her little brother. 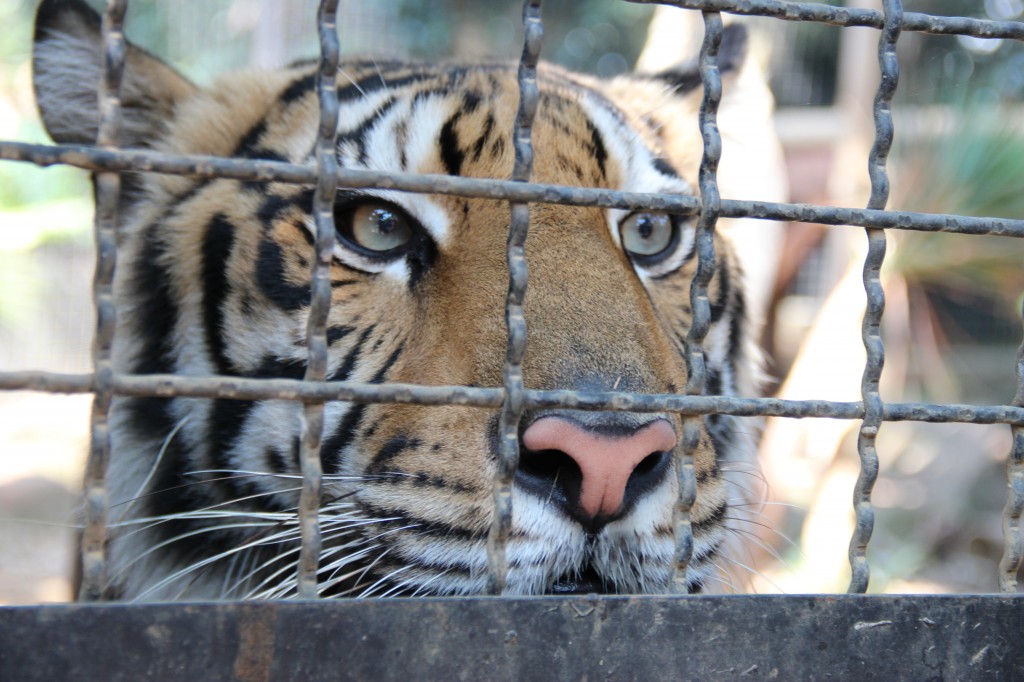 Never have I been this close to something so beautiful and huge. I could literally feel and smell it’s breath from the two feet away where I was. Good thing the sign warned me not to stick my fingers in. I would have totally not known to keep my hands out. LOL 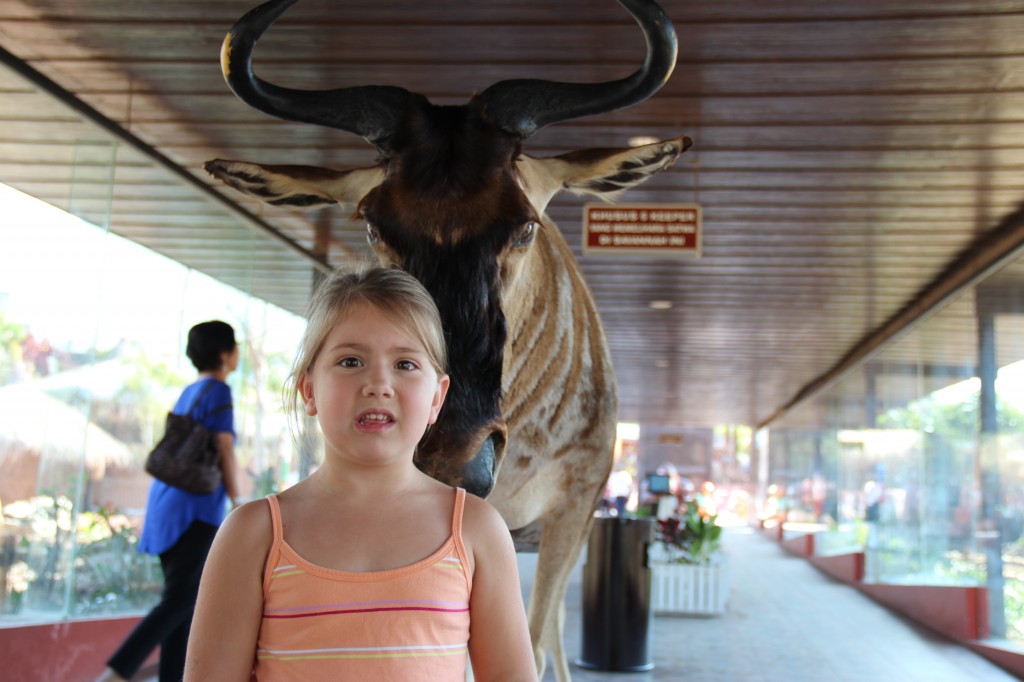 Don’t look now but there is an animal right behind you! “really?” 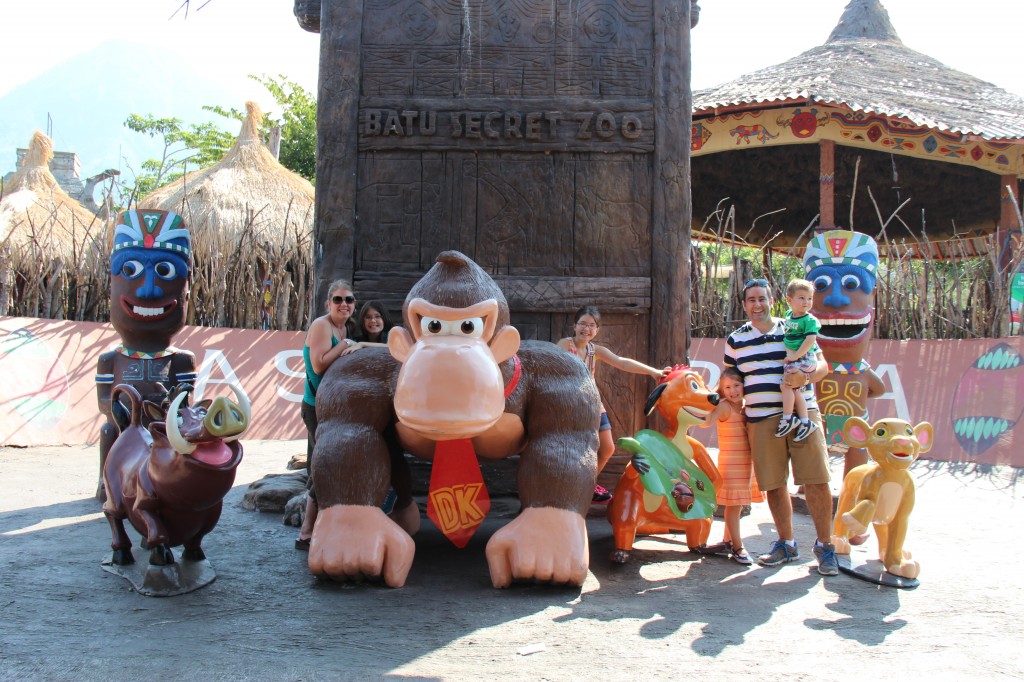 Just us with some crazy characters 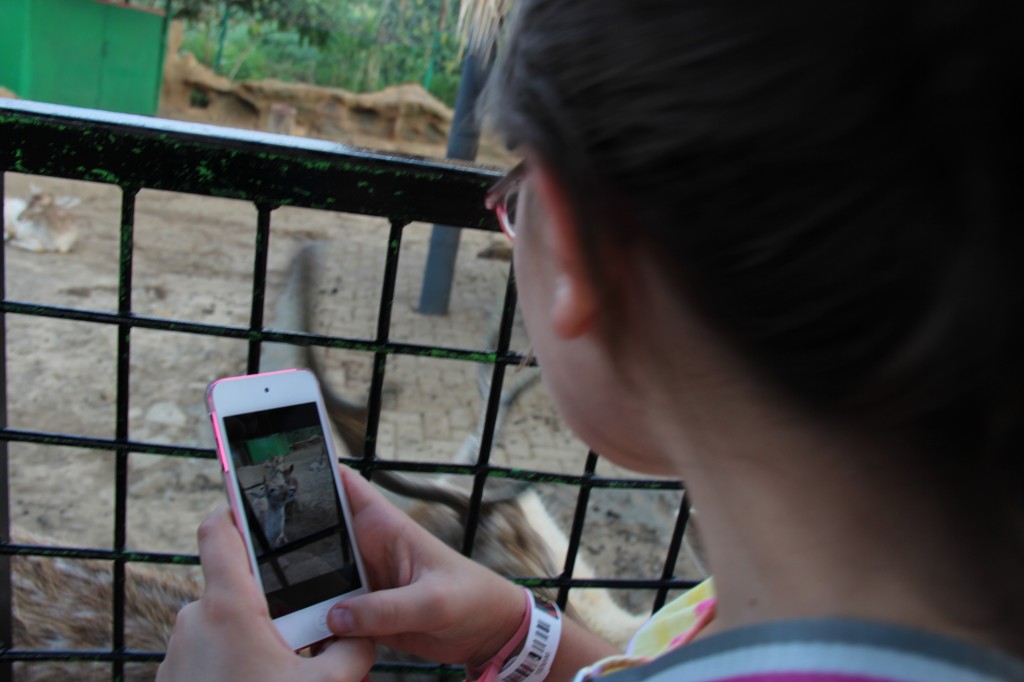 They thought being close to the animals was fun when they were small enough to be on the other side of the cage we were riding in. 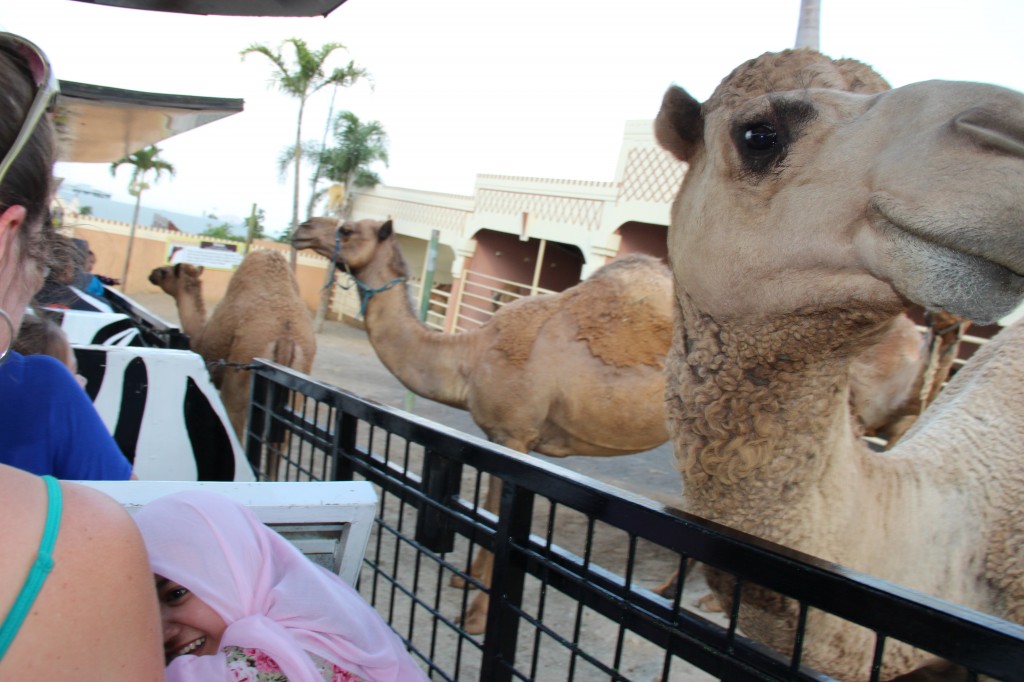 As the animals got bigger…everyone on board became a bit scared. Especially this lady who chose to hide in Dana’s lap. 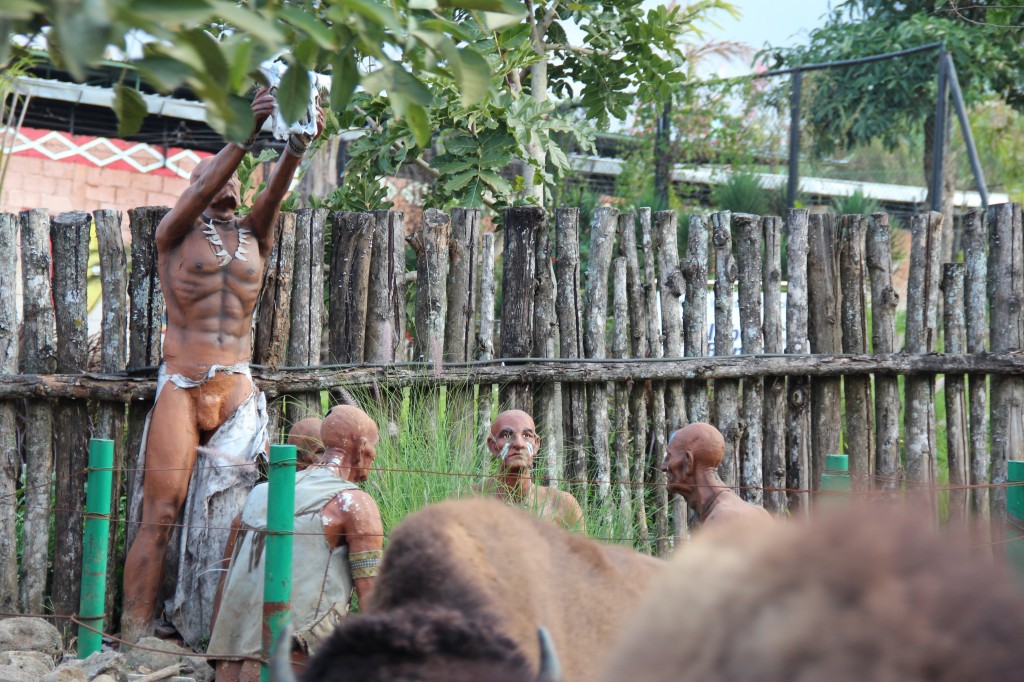 Don’t look now, but I think it’s time for another skirt Chief! 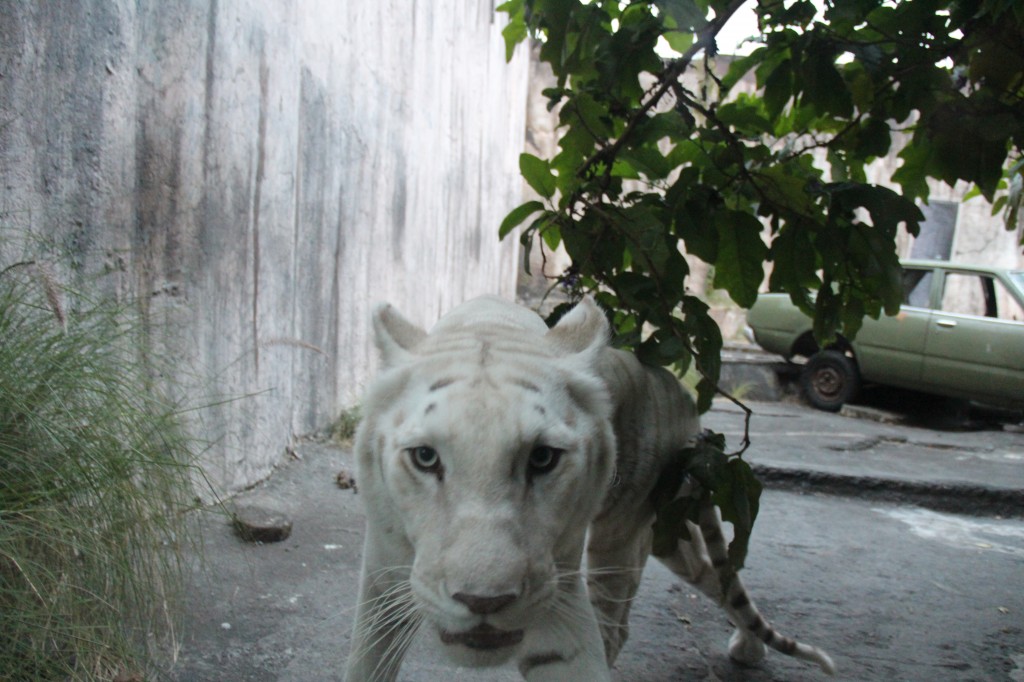 Don’t look now, but I think we are about to get eaten! Nice little kitty kitty. Kids get in the car…LOL