Leading by love vs. legislation

Before reading, choose not to be offended…just process this, get your brain thinking!

Obama made a big step today by 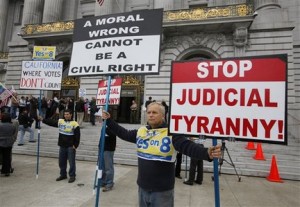 sharing his “personal opinion”.  It just so happens that his personal feelings actually do affect more than just him, but that is beside the point.   His statement in support of same sex marriage was in response to a ruling yesterday in North Carolina defining marriage as between a man and a woman and upholding a constitutional ban on gay marriage.

As a bible believing Christian I am completely familiar with this subject, especially when pastoring a church called Open Life!  I believe every word written in the bible and it leads me to understand that my relationship with God should foster my view on marriage and the intent of such to be between a man and a woman.  I get that, and I also get that some of my family and friends are gay.  We can probably all echo this unless you are living in denial or a separatist life in hopes of never being contaminated by the world (which is unbiblical and off the intent of Jesus example).

That said; I don’t see anything within the content of scripture encouraging me to legislate morality.  If anything, I see the opposite.  We see that Jesus came to fulfill the law, and introduced us to the fullness of God’s forgiveness, hope and mercy.  While Jesus lived according to the law of the land, even paying his taxes, he did not encourage the disciples to go forth and make laws upon that land that would make people with no relationship with God live as if they were children of God.  Instead we see that purity and faithfulness to God’s standards is a matter of the heart and surrender to a faith in Jesus.  And we are challenged to bear the fruit of those who are no longer under the law, which makes sin abound, but under grace which makes love abound for all.

So why does it surprise the conservative politicians and religious rulers of our day (who take an offensively harsh and impersonal approach at morality and culture) when people get ticked at their attempt at legislating morality?  Their push back is totally justified by our hypocrisy!

Maybe if those of us who love Jesus live out a life that truly reflects Him, we would inspire people to live according to the word of God instead of trying to force those who are without a demonstration of faithfulness to live biblically in a very post biblical culture.

You can’t claim you have a better way of living unless you prove your way of living bears better fruit.  Let the fruit lead your friends, family, city, state, government and country into right relationship with Jesus and stop trying to force them to live as if they are Christians before they ever choose Jesus in the first place.

Until then, let’s love people…all people, no matter their ethnicity, gender, sexual preferences, or criminal pasts!  Let’s engage in life with everyone, learning where they are coming from and allowing them to see where we are coming from, but all the while living in unity, community and love.  Isn’t that what Jesus said we would be known by?

Let’s get back to leading by love vs. legislation…it just works better in the end!  And I echo our President…”it’s just my opinion.”